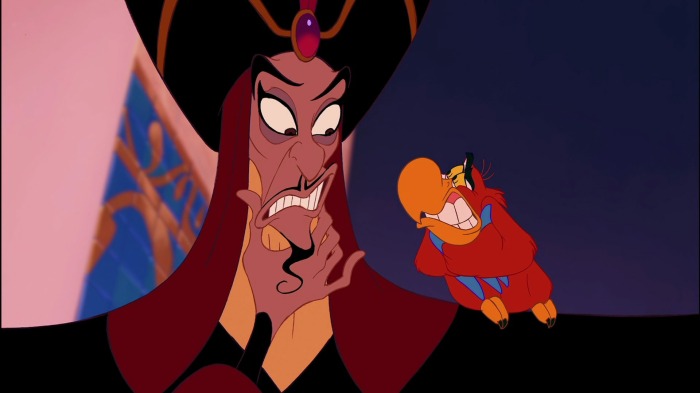 Some of their characters have surprisingly horrible ends, so Disney don’t always shy away from including darker elements in their films. That said, there are still occasions when they can’t compete with the originals, so I thought we could look at a different kind of death match: a morbidly curious list of characters Disney decided to save or kill off.

I will only include the characters that appear in the films and not those who were absent from the start (e.g. Aladdin’s parents), and I’ve grouped them by film, otherwise we’d likely be here forever.

In Part One we’ll look at the characters Disney decided to spare and what befell them in the original.

Life imprisonment with a hyperactive parrot.

When the alternative is to have your head hacked off in your sleep, most people would choose Door Number One. The again, it might depend on your companion’s voice.

The evil sorcerer in Aladdin and the Enchanted Lamp, like Jafar, manages to abscond with both an entire palace and the princess thanks to the power of his newly acquired lamp. Luckily our hero Aladdin is a man with a plan, and gives the princess a drug to slip into the sorceror’s wine. The sorceror slips off into the Land of Nod, and then demonstrates a particularly severe nod as his head is sliced from his shoulders. At least he would be spared any sequels.

Caged by poachers, then rescued by Tarzan.

Shot with poisoned arrow, then avenged by Tarzan.

As Tarzan’s adoptive mother, Kala was the only ape who wasn’t constantly trying to kill him. So it stands to reason that of all the apes lumbering about in the jungle, a local  cannibal decides to pick her for his main course. After the poisoned arrow has done its duty, Tarzan takes off after him to wreak revenge as well as continual havoc in his village, realising that now his “mother” is gone, all he’s left with is a group of naked primates bent on beating him to a pulp at every opportunity. Time to move out then.

Frightened away with fire.

Hunting Mowgli is only a sideline for Kipling’s Shere Khan. He’s much happier snacking on people in the local village and sleeping in sunny ravines, but the latter habit leaves him open to the man cub’s dastardly plan. With the help of his wolf pals, Mowgli causes the village cattle to stampede right through said ravine, trampling the tiger underfoot and crushing him to death. He then skins him and drapes his fur over Council Rock like a trophy. See, Scar? Your mistake was enlisting the help of canine wannabes rather than actual dogs.

#4: The Main Cast of The Fox and the Hound

Film: The Fox and the Hound

Tod is even more of a cheeky scamp in the novel and when Chief gets loose – while the fox is teasing him –  he deliberately leads him into the path of a speeding train. This isn’t the only train wreck the fox bears witness to; as a result of Chief’s death, Copper and his master pursue him avidly over many years, wiping out two of his families and turning his life into a constant hunt, right up until he collapses under a victorious but equally exhausted bloodhound. Unfortunately for Copper, before Tod’s skin can even dry on the trophy wall his master is told to move into an old people’s home, leaving the hunter no choice but to euthanise his loyal friend as dogs aren’t allowed. I would have taken him to an animal sanctuary, but okay.

Film: The Hunchback of Notre Dame

That’s right – in the original, Frollo sort of won. In the beginning he’s the only one who believes Esmeralda is versed in the dark arts, but after framing her for the murder of Phoebus – despite him being very much alive – public opinion turns and the young gypsy is arrested and tortured. Phoebus could have stepped in to say he wasn’t really dead, but she was making their relationship a bit awkward in front of his fiancée, so he leaves her to get lynched. The only one who seems to care is Quasimodo, who after shoving Frollo off the top of Notre Dame disappears and is later found in skeleton form hugging her corpse in the catacombs. Maybe you should have stayed in the tower, Quasimodo.

Changed back into human form, lives happily ever after with Eric.

Dissolves into sea foam, then has karma reduced to zero.

The poor mermaid. After throwing away her family, lifestyle and voice to impress the first guy she fancies, she misses the boat and he marries someone else. As well as having to endure the wedding, due to her agreement with the sea witch she ends up dissolving into sea foam the morning after, and not due to excessive alcohol consumption. Fortunately, she is resurrected by the angelic Daughters of the Air, who admire and reward good and heroic deeds, but despite this the mermaid’s ultimate sacrifice counts for precisely bugger all, as she will have to start entirely from scratch if she ever wants to earn an eternal soul. Karma is indeed a bitch.

Shackled and sent back to England in disgrace.

Skinned and burned alive by the Powhatan (according to Price).

Ratcliffe was one of the original overseers of Jamestown in Virginia and had an extremely nasty end at the hands of the Powhatan, at least according to journalist David A. Price. Even before John Smith left for home after blowing himself up, relations between the English and the native Americans had begun to sour, mainly due to the English bullying the natives for food and land and the natives responding in kind with food and arrows,  and when Ratcliffe stepped up to negotiate with the chief, things deteriorated even further. It’s not clear if the English threw a strop on the spot or if the Powhatan had planned it all along, but Ratcliffe’s men were ambushed and killed, his ship was attacked, and a group of Powhatan women skinned him alive with mussel shells before burning him at the stake.

And you thought Disney treated its villains badly.

The obvious rule here is that you don’t kill your protagonist, especially if they’re an animal. Even more so if they’re endangered and if letting them live lets you dance around any uncomfortable stereotypes. What is quite surprising is the mercy shown to the two villains – of course Disney couldn’t include Ratcliffe’s original death, but although both of these men do quite despicable things, they are either comically tied up or treated to a spot of poetic justice rather than the usual unintentional-but-convenient-fall-from-a-great-height scenario.

Some of the characters in Part Two aren’t quite so lucky.

8 thoughts on “Mickey the Merciful: Part One – Who Disney Saved”